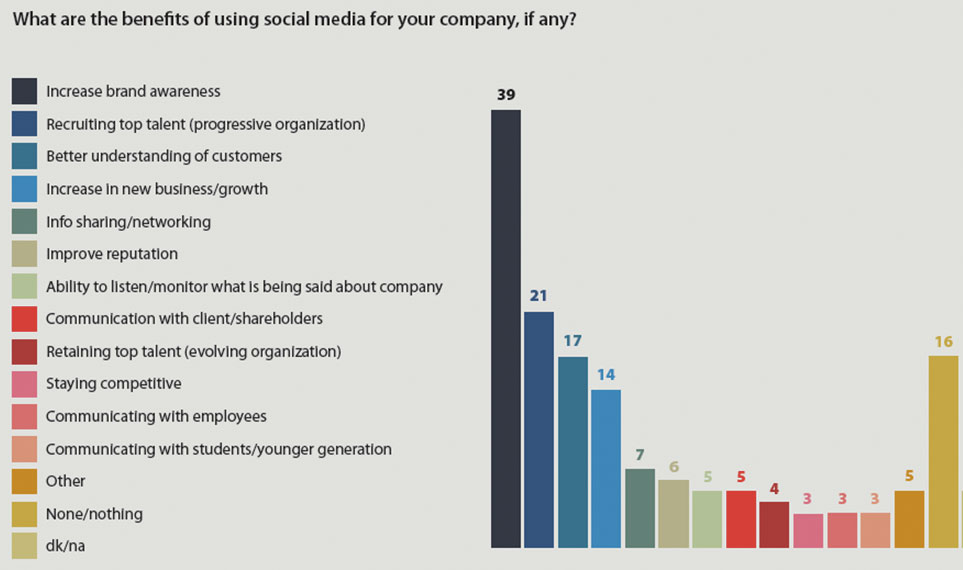 On August 18, 2016, Posted by tacticalmarketinglabs_admin , In Marketing, With No Comments

The study provides insight into the thought process of executives regarding social media and it’s value (perceived, realized, or imaginary) in business. Two things seemed especially interesting to me. One, the fact that so few companies are using social media to learn about their customers shows that social media education & training is still under utilized and needed more than ever. Two, fear seems to continue to paralyze executives and businesses based on their assumption (you know what happens when you assume) that employees will say something stupid. The solution is simple, hire the right people, treat them fairly, and give them proper training on how to effectively use social media. Doing the right thing could lead to your employees, their friends and family, and their friends and family (you get the picture) being your greatest brand advocates (ask Zappos if that’s valuable).

A new poll of 400 Canadian business leaders by Queen’s School of Business reveals decidedly mixed feelings about social media. While four in ten (39 per cent) bosses say social media is something they need to use—whether they want to or not —close to an equal number (35 per cent) say they use it heavily because it’s a good opportunity for the business, with the remaining 24 per cent saying it doesn’t add any value. Despite these divisions, a strong majority of executives (72 per cent) are planning to invest the same or more on social media versus last year.

The survey also reveals that many executives worry about how the use of social media by their employees might affect the company’s reputation. For example, the vast majority of executives (91 per cent) agree that employees should be mindful that even when using social media on their own time they are still representing the company.

“What happens on Twitter doesn’t just stay on Twitter,” said Kate Rowbotham, Professor of Human Resource Management, Queen’s School of Business. “People may feel that their participation in social media is personal but the boss doesn’t necessarily agree that your opinions are just your own. We have seen a number of examples of overexposure on social channels by individuals that has had a negative impact on the overall organization.”

The mic is always on

• Close to nine out of ten business leaders (88 per cent) say that participation in social media after hours can potentially have an “extremely positive or negative” impact on the company’s brand.
• One third (34 per cent) disagree with the notion that what their employees do on their own time is their own business.
• Two in ten bosses (22 per cent) feel social media use by employees outside 9-5 should be monitored.
• Over two thirds of executives (68 per cent) report that their organization has policies on the use of social media at work, while two in ten (18 per cent) forbid social media usage at work.

Increasing brand awareness is perceived by executives as the top benefit of using social media, mentioned by four in ten (39 per cent) of respondents. Rounding out the top five responses on the number one benefit were: recruiting talent, gaining a deeper understanding of their customers, getting new business/ growth and networking.

Other thoughts from the corner office

• So much for employee engagement: Only a tiny minority of execs cited retaining top talent (four per cent) or communicating with employees (three per cent) as the top benefit of using social channels.
• Execs are practicing what they preach: Eight in ten execs polled (82 per cent) are personally using social media, with LinkedIn as the clear front runner among the channels.
• Time to update the resume: When considering a new employee, one third of execs view social media experience at least as important as speaking a second language or having international work experience, and one quarter view social media experience as just as important as years of overall experience or industry experience.
• What Boomers can learn from Gen Y: 51 per cent of execs “strongly agree” and a further 28 per cent “agree” that social media is making it harder for older employees to compete in the workforce
• Investing in social media makes cents: Seven in ten execs (72 per cent) report a greater or equal investment in social media efforts this year compared to 2011.